My First Experience with Qualitative Interviews 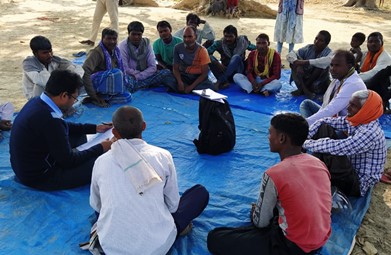 My First Experience with Qualitative Interviews

I recently got a chance to visit the city of Varanasi for a project. Along with a colleague of mine, I had to conduct a couple of qualitative interviews with NGOs who primarily worked on the issue of forced labor. We had to talk to the beneficiaries of those NGOs as well.  I was thrilled to be a part of this project because it this was my first experience conducting qualitative interviews. I had gone to the field earlier too, but trained the quantitative data collection team. I did not interact with the community members back then. But this time, I had an opportunity to talk to the people on the grassroot level and learn about the challenges they face every day.

Though I was very excited about the field visit, I was also  worried about the COVID-19 situation. At the time of writing this, COVID-19 is still a threat, although the prevalence has gone down. However, as we reached our destination, Varanasi, I noticed that nobody was wearing masks and did not bother to maintain social distance or follow any other precautionary measure. Instead of worrying more after seeing that, I forgot about the disease too. Maybe the holy city started to affect me? But I was following all the COVID-19 safety protocols. The other cause for my worry was that I did not have any experience of conducting qualitative research. I vaguely knew how it was done, but to conduct the interviews confidently, I read a few articles and watched a couple of tutorials. Those helped a lot. Also, the colleague I was traveling with had also shared many useful tips.

My first interaction was with one of the heads of the organization. As I mentioned earlier, I did not have any experience conducting interviews, so I was a bit nervous. Fortunately, my colleague led the interview, and I took notes. This enabled a practical experience of conducting interviews. After that, we went to a village to conduct the focus group discussions (FGDs). There were two separate groups, so my colleague and I split to talk to them separately. Each group had 7 to 10 people in it. And this time, I had to lead the interview on my own. After struggling for the initial few moments, I soon realized that it was not that difficult. I started talking to them as if I knew them and they knew me. This helped me in boosting my confidence for future interviews. This continued for the next three days. And each time, there was a thing or two that I learned.

Talking to the NGO workers and community members was insightful. By talking to them, I understood how important NGOs are. For example, I was talking to a survivor of child labor. He told me that their village did not have basic infrastructures like roads, street lights, pucca houses, and toilets a couple of years ago. When an NGO intervened and started working with them to help resolve their issues, they started getting these facilities. That NGO ran multiple awareness campaigns about government schemes and how to get benefits from them. That NGO taught them about their rights and helped them set up a self-help group (SHG). Through this SHG, the community members help each other. We all know that NGOs played a major role in providing relief material and other essential services during the COVID-19 lockdown. One of the heads of the organization said that, although their work was equally important during the lockdown as medical personals and police, the government never considered them as the frontline workers.

The NGOs that we interacted with primarily work with the Musahar or Banwasi community. I learned that Musahar, which means ‘rat eaters,’ is a Dalit community. They are one of the most marginalized communities, even among Dalits. The community members that I talked with all belonged to the Musahar community. Many of them were rescued from brick kilns and carpet factories, working as bonded laborers. They told me how life was before they were rescued and how it was now, after being rescued. Their experiences were real eye-openers. They told me that they still face caste-based discrimination, albeit  less than what it was a decade or two ago.

This field trip to Varanasi taught me a lot. Learning about qualitative interaction was very interesting. It is also an essential skill if one wants to conduct research. Though I learned a lot about conducting the interviews, I still have a long way to go. Talking to the community members was eye-opening; their stories were inspirational. It was also very interesting to see how important NGOs are when helping vulnerable communities.